Lately I have been helping a friend (Hayden) with his current project, of a bike port, and admit Hayden has done most of the work. Doesn’t sound to difficult and in reality it isn’t but we have had to work with in certain criteria and limits.

One side to be be supported by an existing retaining wall, while the other side be unobtrusive and basically no support at all to allow a vehicle to park beside (or partly under) it leaving room to get in and out to the driveway (which is another story in itself). It is one of those jobs where you have to see it to understand the situation. We had to work within 15 square metres so we didn’t need a permit. It still allow this structure to have a water run off so the angle of the roof is is lower on the side of port not the wall, reasons for this explained later. We have to make it strong enough to allow the weight of snow on top of it as well as an up draught of a wind pressure under it. Because the whole thing could be ripped out and become a big sail if not thought about.

Along the back upper (and new) wall 4×4 was added across the top of the piles bolted and nail plated in. From this we can add the x3 6×2 beams out and over the piles coming up from the main retaining wall, and then some bracing and joists and roof.

It has been interesting, using our brains to come up with solutions for out of the ordinary problems. We are not quite finished (they didn’t have enough roofing and waiting on more to arrive in stock… heck only require 2 more sheets. This gives Hayden an area to work on his bike in the rain (unless it is side ways rain).

Now above the retaining wall to the new back wall has been plyed and we will make lockable cupboards and storage area which is right up and under the lean too bike port. 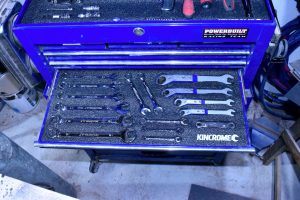